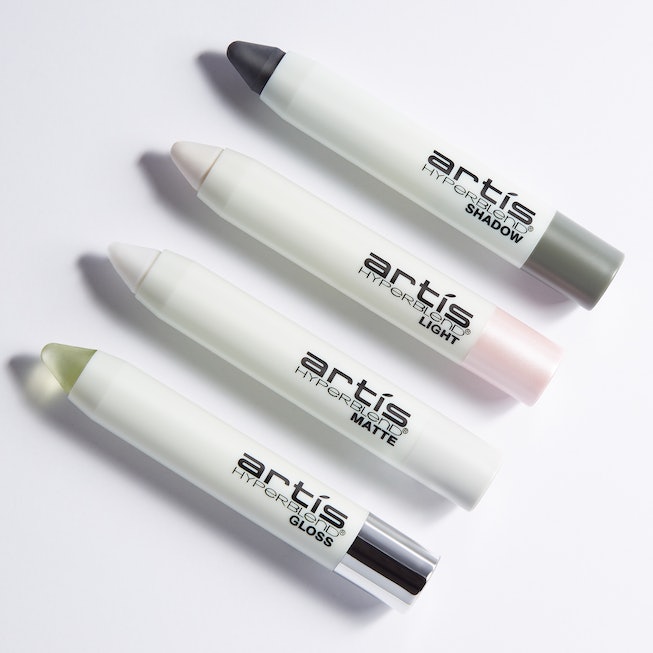 Branching out beyond its coveted makeup brush offerings, Artis released four makeup pens that use some major beauty magic. The Hyperblend Pro Finishing Pens interact with one another and how your eyes perceive light, delivering dramatic looks that require the application of no actual pigment.

Upon initial glance, the four pens appear to be quite muted in color. However, each pen creates a subtle skin accent, and will appear quite pronounced when applied. Sold as a complete set for $50, the pens are intended to create four different individual effects: mattifying, gloss, glow, and contour. Each pen is labeled for its intended purpose.

Pens can be traced lightly upon the intended application area, and Artis explained where each pen should be used. The Glow pen creates a natural, realistic highlight, and when applied along the edge of the eyebrows, over the eyelid, or the hairs of the brow, you'll get a defined, natural finish. For an extra touch of glimmer on the eyes or the lips, you can apply the gloss pen.

Rounding out the set is a matte pen, which can be applied along the outside edge of your lips to keep color in place, and a shadow/contour pen, that can be applied under or above makeup. Add a small line of shadow under the cheekbone or along the nose for a shadowing effect, or combine it with your favorite eyeshadow to enhance the product's appearance.

As explained on its website, Artis specifically created the pens for an impactful and easy makeup routine. Noting a current climate where many are working from home and not putting on a full face of makeup, Artis noted that you can create a dramatic look without the use of color or glitter.

Get a closer look at the pens, below.